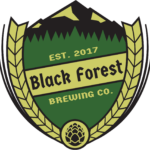 We are proud to call the Black Forest home, and we invite you to gather with us.

While traveling the world as a member of the United States Airforce, our owner, Donovan Routsis, and his family so many amazing cultures, tastes, and people: many pieces of which you’ll find within the walls of our Brewery. What they later found out, however, was that the constant relocating never allowed them to truly get involved with a physical community. By the time they developed friendships or found a local place that they all enjoyed, it was time to move on. So, when it came time for Donovan and his wife, Tara Routsis, to retire (after having a combined 45+ years in the service), they knew that Colorado would be the place to put their roots down, especially as this had been the state where they met and married. During that time, Donovan had been a young lieutenant at Peterson Airforce Base, right here in Colorado Springs. During that time, Donovan was introduced to  craft brewing for the first time Colorado had always seemed to be where passions began and love started for Donovan and his family. When they decided to go forward with opening a brewery, they fell in love with Black Forest. Now, almost two decades since Donovan first brewed, Black Forest Brewing Company has become a place where  he can combine everything that he appreciate about craft brewing, traveling, and community. He wanted to create a place that was not just about great beer, but about great company as well.

So, next time you’re in the forest, we invite you to come gather with us. Come see what Black Forest has to offer and enjoy local brews from local businesses. We are proud to be your Black Forest Gathering Place. Read more about us in the Gazette!

Be A Part Of The Family

Get more involved with the Black Forest Brewing community than ever before with our Stammtisch Mug Club membership! Join and receive a 20-22oz handcrafted mug, gain a seat at the "local's table," and receive discounts on food and merchandise!

Hours vary due to COVID-19. Call Before Your Visit.